The WaveFlyer from Electro.Aero is said to be the world’s first electric hydrofoil PWC 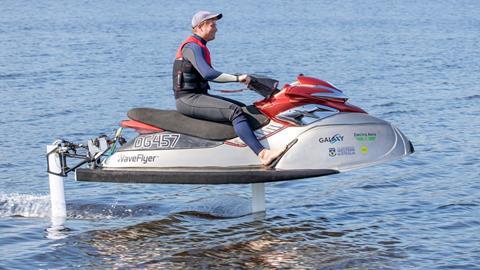 Details of the WaveFlyer’s propulsion system have not been released

Electro.Aero, an Australian start-up based in Perth, has developed what it claims is the world’s first electric hydrofoil personal watercraft – the WaveFlyer.

While there have been electric personal watercraft before, WaveFlyer differs as it rides up on foils with power coming from an underwater electric propulsion unit attached to the foils.

Funding for the project came from Galaxy Resources, a lithium producer in Australia. The team worked with the University of Western Australia and their director, Professor Thomas Braunl, said: “The development of WaveFlyer builds on previous work carried out by the team that developed Australia’s first electric jetski in 2015.”

When off the plane, WaveFlyer appears similar to a conventional jetski, but as speed rises so it lifts in the water with the actively stabilised hydrofoils.

Details of the propulsion system have not been released, but it is based around two water-cooled, three-phase electric motors that are mounted underwater on the rear foil, which also acts as the rudder.

The proof of concept battery power comprises lithium-ion batteries that provide 2kW hours of power, which is enough to propel the jetski for half an hour whilst on the foils. A production WaveFlyer could easily carry 4-8kW of batteries for 1-2 hours of foiling endurance. A charging system allows quick charging.

Electro.Aero is involved in the development of battery powered light aircraft and much of the technology used in the WaveFlyer stems from that developed for aircraft. Chief technology officer and co-founder of Electro.Aero Joshua Portlock commented: “The technology used is not only environmentally friendly, it should improve the safety, experience and efficiency of personal watercraft. We are very excited about the WaveDrive stabilised hydrofoil electric propulsion system we developed for the WaveFlyer prototype, as it is a technology that could help revolutionise the watercraft industry.”

While there are no plans for the WaveFlyer to go into production and it is still in the development stage, the jetski hydrofoil development follows that of the boating market in general, which is seeing considerable interest in the use of hydrofoils to improve performance. Some concerns have been expressed about the risk that jetskis riding on hydrofoils pose to swimmers in the water.