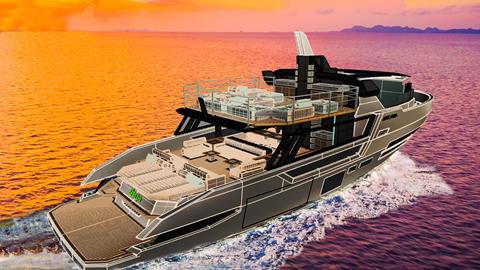 Italy-based Arcadia Yachts has announced that construction of its first 24m Sherpa XL ‘pocket megayacht’ is proceeding rapidly and is on schedule for its global debut at the 2019 Cannes Yachting Festival in September.

As IBI went to press, Arcadia had completed all carpentry work on the new vessel, as well as finishing the work to connect the hull and deck. The electric systems, insulation layers and the hydraulic and mechanical systems are currently being installed.

“This new model is another step towards the creation of a new concept of yacht, which gives the green light to a new line and is not simply a Sherpa on a larger scale,” Pellegrino adds. “The latter would have been a quicker and easier solution for us, but we fully intend to keep our role as innovators and to continue to push our industry further.”

The areas onboard the Sherpa XL make good use of the vessel’s 24m length and especially its beam, which is nearly 7m compared to the average 6.3m on most 85ft-90ft yachts, providing 220sq m of interior and exterior living space. One of the highlights is a 34sq m skylounge on the upper deck. The yacht was developed in collaboration with Milan-based design studio Hot Lab, which worked with Arcadia on the A105 projects.

The Sherpa XL is available in a three- or four-cabin layout. In the four-cabin version, the galley is positioned in the skylounge on the bridge deck, whereas in the three-cabin version it is in the lower deck. In both cases, great attention has been given to separate the areas reserved for guests from the service areas for the crew. Specific corridors and rooms for crew provide guests with a level of privacy that is typical of larger yachts.

The master suite is over 22sq m and extends into the bathroom with no dividing partitions, making it large, open and full of light. The VIP cabin in the bow follows the same principle.

The Sherpa XL is powered by twin Volvo Penta IPS 1050 main engines as standard, although it is possible to install two IPS 1350 engines (as in the first unit currently under construction). The yacht can reach a top speed of over 20kt. At 12kt, the Sherpa XL yacht can sail for over 1,000 miles, using up to 30% less fuel compared to other yachts in the same and 85ft-90ft class.

The Sherpa XL is also equipped with solar panels that provide up to 3kW of electricity – enough to power all onboard systems except for the air conditioning.