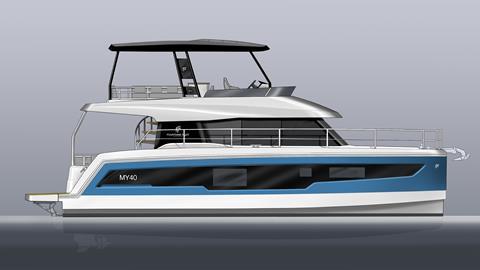 New models launched from both brands

The Fountaine Pajot (FP) group, which since last year includes Dufour, emphasised its new status at boot Düsseldorf last week, indicating that it is now a leading player in the European boating market.

Both companies have manufacturing facilities in or around La Rochelle, France, and together they employ some 1,200 workers.

At Düsseldorf, both brands launched new models with FP holding a world premiere for the MY40, the latest model in its motor catamaran range, and also displaying the Astrea 42 sailing catamaran.

FP also highlighted the new Power 67 motor catamaran, which is being produced as a powered version of the Alegria 67 sailing catamaran to respond to a specific customer demand. It is the new flagship of the FP motoryacht range.

The MY40 followed on from the award-winning MY 44 last year and FP’s Astrea 42 maintained this success by winning the 2019 European Yacht of the Year award in the multihull category.

The new MY40 is said to be part of the ongoing investment and refreshment of the motoryacht range. This range of three models, which also includes the MY37 and MY44, cost between €300,000 and €1m.

The MY40 has a flybridge and owner’s suite of unprecedented size for a boat in this class. With a contemporary design and distinctive bows, she presents a distinctive profile which matches the reported performance.

FP indicated that Dufour will be operated as an independent brand within the group but already there has been a lot of synergy between the two with a good mix of skills across both companies. The mix of business is based 70% on sail and 30% on motor, but this may change over time.

For FP there is a strengthening of the dealer network in the US, while Dufour is especially strong in Mediterranean markets such as Italy, Greece and Croatia.

The FP strategy for its motoryachts is based on a contemporary style, space and pleasure. Fountaine Pajot has been producing motor-powered catamarans for 20 years.

Romain Motteau, deputy CEO, commented: “The current motoryachts range is only five years’ old. We wanted to offer small catamarans in the yacht sector with three key features: speed, manoeuvrability, and an owner’s suite worthy of the most luxurious monohull cabin cruisers. No two-hulled boat could do top speeds of 30kt until now.

Speaking about motoryacht performance, Stéven Guedeu, FP’s sales director, said: “As far as performance is concerned, all our boats display a target speed of above 20kt. For the MY44, it’s 25kt fully loaded.”