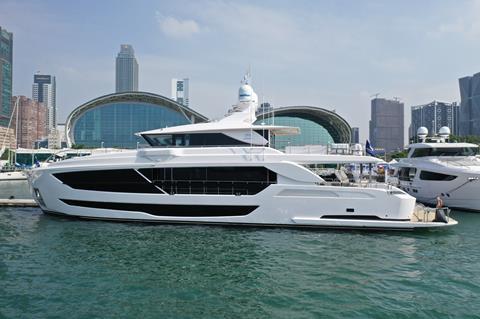 The Horizon FD102 in Kaohsiung, Taiwan

Horizon Yachts used its bi-annual Open House event in Taiwan to unveil its newest additions to the expanding FD Series.

Taking pride of place at Horizon Marina in Kaohsiung, the two new 2020 models, the FD75 and FD102, were released to a gathering of international media, Horizon dealers and clients this week.

When Dutch designer Cor D Rover conceived the idea for the FD (Fast Displacement) Series, he wanted to achieve the maximum amount of volume on the lowest waterline length, which he set at 24m. The layout also called for the owner’s stateroom on the main deck.

The result was a boat that had people talking. There were some detractors who felt the bullish hull lines and snub bow design was too much and potential clients would baulk at the very non-traditional lines.

However, when the designer showed it to Horizon Group CEO John Lu, he had no hesitation in taking on the project.

“Once the concept and design parameters were explained to me, I could understand what the designer was trying to achieve and could see the potential of the boat,” said Lu.

The first of the FD Series, Skyline, an FD 85, was delivered to its American owner in 2016 and was an instant success. It was praised for its performance and exceptional stability, and quickly more orders followed for the yard. Today the range comprises seven models, from the just-released FD75 through to the still in development FD125. Of the 25 FD Series boats built to date, 10 of those have been the FD87, with owners spread throughout the world.

While the FD75 is the smallest in the FD Series at 23.7m, it carries the same DNA as the rest of the FD family. Cor D Rover’s same principles applied with just a little less space to work with. However, despite this, he has still managed to incorporate the master stateroom at virtually the same level as the saloon, albeit down a couple of steps. He also wanted this to be an owner/operator vessel, with no crew, although provision is made for two crew should an owner desire it.

Lu says that there is a mindset about the length of a boat determining how big it is. “But with the FD Series, we are trying to change that perception, so that the size is based on volume, much like we offer with our PC powercat Series,” he says. Lu points out that the FD Series has a 25-30% gain in volume compared to a similar vessel with the same LOA.

“The FD75 can have five staterooms, including the on-deck master which is what you traditional find on 40m-50m superyachts. So what more do you need?,” says Cor D Rover.

He added that he is seeing a trend by superyacht owners downsizing to a smaller boat that requires less crew, has lower running costs and marina fees, and fewer hassles that are associated with owning a much larger vessel.

“The trend with our clients is that they want to be individual and that’s one of the benefits of building a vessel with Horizon. The layouts are extremely flexible, and Horizon works closely from the concept stages, and right through the production process with every owner. So much so that every boat has something that makes it different from all others,” says Cor D Rover.

The first FD102 was built for a European owner who wanted to step up from his FD87 into a yacht with extended range and more superyacht amenities. Overall length is 33.07m with a wide 7.68m beam and large outdoor spaces.

There are currently three FD102 s in construction with hulls #2 & #3 from American owners, plus a second FD75 speced for the American market.