The iconic Halvorsen brand has been revived in the form of a new range of connoisseur craft, launched in 2019 as the Newport 460 – a collaboration among industry veterans and described as being ideally suited to couples who enjoy entertaining onboard and quiet coastal cruising.

Blending the classic lines of a ‘down east’ style cruiser with advanced engineering and unique “Python drive” technology which results in close to silent cruising, the Island Gypsy Newport 460 builds on the seafaring spirit of the Halvorsen brand. 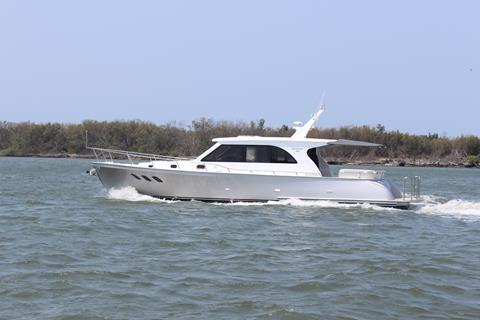 Two Island Gypsy Newport 460 models are currently based at Sanctuary Cove and available for sale through Sanctuary Cove Boat Sales. The third vessel, a two-bedroom version of this 46-foot (14-metre) model, will arrive in time for Sanctuary Cove International Boat show in May 2020.

Veteran motoryacht designer and dealer, Brett Flanagan has been named the company’s director and CEO, in partnership with Allan Francis, whose mechanical engineering expertise was crucial for the brand’s point of difference.

Two Island Gypsy Newport 460 models are currently based at Sanctuary Cove and available for sale through Sanctuary Cove Boat Sales. The third vessel, a two-bedroom version of this 46-foot (14-metre) model, will arrive in time for Sanctuary Cove International Boat show in May 2020.

There is also a 50-foot (15.24-metre) model on the drawing board and a new incarnation of the original 36 and 40-foot Island Gypsy motor yacht which Flanagan says he is keen to get into production.

The Island Gypsy brand is steeped in Australian cruising culture - one of the original Kong-Halvorsen/Island Gypsy was a 38-foot motor yacht known as the “Gourmet Cruiser”, prized for its appealing style and design, seaworthy semi-displacement hull, generous deck space and social layout.

Built to last, the Island Gypsy was renowned for its reliability and hallmarks of an era when the voyage was more important than the destination.

The next generation of Island Gypsy motoryachts will carry the torch, constructed at the purpose-built factory in Guangzhou, not far from the original Island Gypsy facility.

With its proven planing hull, narrow entry easing into a soft chine, the hull will deliver comfort and stability in all sea states.

Below decks, owners can specify either a one-cabin or two-cabin layout.

The first models come with 480hp Cummins diesel engines and Onan generators, coupled to a ZF 2:1 gearbox and running through its new technology “Python” drive system which has been especially designed for this range of boats.

This system, the build claims, equates to minimal maintenance and sensational performance of up to 20 knots, single engine efficiency, along with class-leading fuel economy.

An innovative system of self-draining sea water ballast tanks stabilizes the boats at anchor or at the marina.

Sanctuary Cove Boat Sales says it is committed to working closely with owners, visiting the factory at key intervals during construction and ensuring owner input throughout the building process.

The boats come with a three-year structural warranty on Island Gypsy hulls, and two years’ Cummins warranty on engines, as well as the commitment of professional after-sales service support, around the clock, in NSW and Queensland, with affiliates around the country.