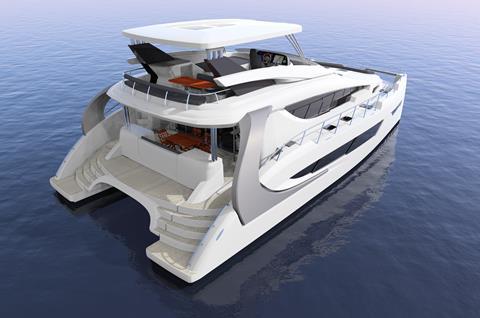 The boat was formally launched at the Miami International Boat Show and follows the successful X5 luxury 50ft catamaran that won a best boat award in 2017. Cape Town-based Phoenix has an exclusive sales and distribution agreement with Miami-based Xquisite Yachts.

Both the X5 and the Xquisite 56 were designed by Cape Town designer Rudolf Jonker. Features include joystick docking, an opening front windshield, iPad-based maintenance software and a hydraulic aft platform.

The Xqusite 56 is expected to be in production later this year, according to a statement issued this week by the City of Cape Town’s investment arm, Invest Cape Town.

Xquisite chief executive Tamas Hamor says: “This new model will be the ultimate luxury cruising catamaran for couples and families who want to explore our oceans under power, rather than sailing.”

Last year Phoenix/Xquisite announced they would increase production to six boats a year inside their expanded Cape Town facility. Currently Phoenix employs 75 staff and has an annual turnover of around US$6m.