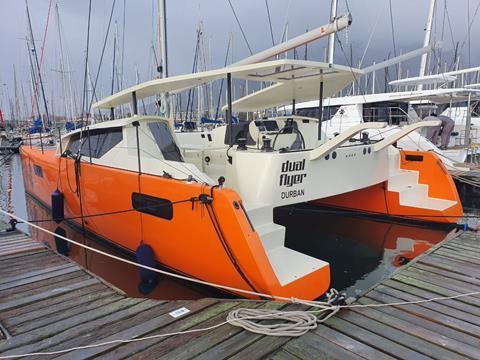 “The reaction was phenomenal,” Knight said. “People loved the boat. Now we are waiting to start sea trials.

“We’ve been building quite a few yachts for 18 years and this is a culmination of all that experience,” he added. “It has been a collaborative project, and it is a sailor’s boat, but one that still gives you creature comforts.”

The Scape Sport 40 weighs in at under five tonnes and is a faster open-deck formulation that was partly custom-made as per instructions from the new owner himself, who is an avid sailor. Scape hopes the boat will appeal to owners looking for more open ocean adventure.

“We have predominantly done day-charter but the idea was to try and break into mainstream sailing boats,” Knight told IBI earlier this year when the model was first announced. “I don’t think we could get much more modern.

“In boating, you have to update your range every four or five years otherwise your boats do look old,” Knight said.

Davidson this week said she expected the boat to generate significant market interest.