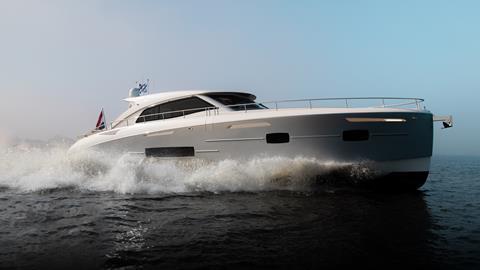 The new aluminium Inveni 18m has launched from its yard in Workum, Friesland

Sichterman, a new Dutch yard that launched just a month ago, has launched its first yacht from its shipyard in Workum, Friesland. The new aluminium Inveni 18m combines elements of the famous Dutch Lemsteraken sailing vessels with a modern vertical bow, and, for a boat of this size, a unique Hull Vane and Fast Displacement Hull Form (FDHF). The hull was designed by Van Oossanen Naval Architects to generate less waves for longer-range cruising speeds and lower fuel consumption – its Russian owner will be using the boat to travel between Russia and the Mediterranean. The boat is also fitted with a Seakeeper.

Cor D Rover was responsible for the styling of the vessel, which had its official launch at the wharf of Workumer Yachtservice where it was built for its Russian owner who will now use the boat to travel.

Sichterman CEO Bart Rehe says: “Our client Mr van Hilst challenged us to push technological limits to a new level and deliver a five-star luxury experience. Being a former sailor, he wanted the yacht to be as quiet as possible, whilst maintaining a high level of comfort and being fuel efficient. And that we’ve succeeded. We’re proud to say that the Inveni accomplishes a fuel saving of 20%.”

Ruud van Hilst said: “Sichterman turned out to deliver exactly what I envisioned. The team and its partners, consisting of Workumer Yacht Services, Van Oossanen Naval Architects and Cor D. Roover, did a great job translating my wishes into a yacht that is safe, comfortable and aesthetically pleasing. After a few tests, I can say that I’m extremely satisfied with the way the ship handles itself in open water. It really cruises through the waves, almost as if you’re on a train. As a man who always sailed sailing vessels, it was quite a big leap to acquire a luxury yacht, but so far I’m very happy with my decision. Next to this, partly decisive for choosing Sichterman, is their service and boat management program. This total care package assures that I can focus on what I love to do: sailing and exploring the world by water.”

Sichterman has also sold three other yachts - currently in build are Certus (16m, 54ft) and Felicitatem (20m, 65ft) and work will start in June on a smaller, more open-styled boat angled at the superyacht tender market, the Libertas (15m, 50ft). The builder is also currently developing the Ambrosca 26m (84ft).