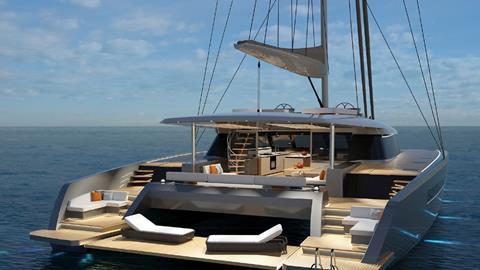 A new 25m (80ft) sailing catamaran project called Waka 80 is to be built by the Bakri Cono shipyard in Thailand. The Waka 80 has been designed by the well-known French design studio of Berret-Racoupeau led by Olivier Racoupeau.

The design of this luxury 80ft catamaran is said to raise the bar on aesthetics, technology and other facets including savings on build cost. By constructing the project at Bakri Cono, a well-established shipyard in eastern Thailand and builder of the Helitrope range of catamarans, a significant cost saving will be made without it is claimed, any anticipated drop in quality.

IBI understands that this project is currently without a buyer and the build time is yet to be confirmed. The new project is being promoted through the Monaco-based yacht services company of Entropia which acts as the Mediterranean agent of Bakri Cono.

Bakri Cono is the largest privately-owned yacht facility in SE Asia. Its Helitrope brand has a proven track record of catamaran deliveries and a reputation for quality that is driven by its Swiss owner’s pursuit of excellence.

Entropia specialises in the rapidly developing world of energy efficient yachts. For every ECO-Yacht that the company brokers, it donates 10% of net proceeds to one of a number of environmental foundations.