Antalya-based Alia Yachts is building the yacht on spec 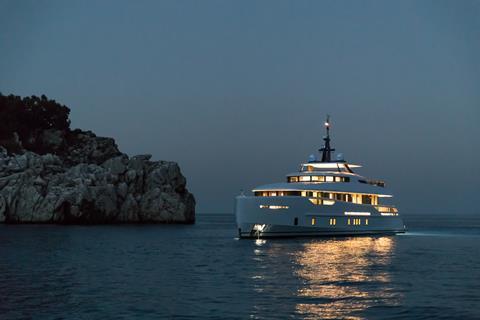 “I said at the time that there was nothing quite like Virgen del Mar VI on the water,” says Alia CEO Gökhan Çelik. “That’s still true, at least until the launch of Nozomi II, which is very much an evolution of the same concept but with some significant upgrades.”

A standout feature of Virgen del Mar VI was its generous volume (235GT) for a compact superyacht. Nozomi II is nearly 2m longer than its predecessor, with a slightly higher gross tonnage (240GT). The extra interior volume this provides is mainly devoted to a larger galley and more wardrobe space in the guest cabins, as well as a dedicated laundry room in the garage.

The exterior styling by Frank Laupman of Omega Architects is virtually identical to that of Virgen del Mar, although the superstructure has been subtly restyled and the new yacht will feature a moderately flared bow.

“Vertical bows look great and provide extra waterline length, but they’re not as efficient at deflecting spray as a flared bow in choppy or rough seas,” explains Çelik. “This is especially relevant on a yacht like this with a seating area on the foredeck, so for the second hull we decided to revert to a positive rake for a drier ride under way.”

Van Oossanen Naval Architects has been engaged to carry out the hull modifications complete with full CFD analysis to achieve optimal performance and comfort of the series.

The power package has also been upgraded with twin CAT engines (760hp x 2) replacing the Yanmar diesels (650hp x 2) for a maximum speed of 14kt and a range at economical speed of nearly 3,000Nm. Furthermore, the generator size has been increased and the bridge equipment upgraded to an integrated bridge Simrad Naviop system.

The basic layout remains unchanged and features a full-beam master stateroom on the main deck with private forward terrace, and four guest cabins (two doubles and two singles) on the lower deck. There is open-air space for dining, lounging and sunbathing on the main deck aft and a 50sq m flydeck behind the raised pilothouse.

Project Nozomi II is scheduled for completion in 2021.