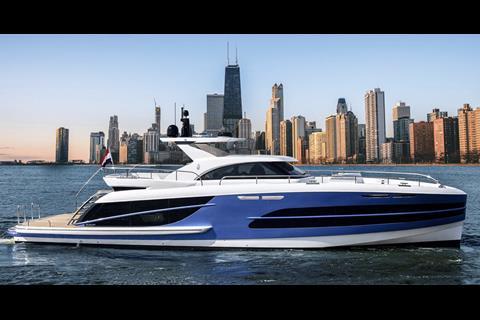 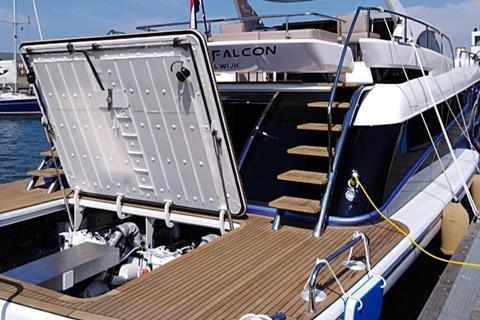 Van der Valk shipyards of the Netherlands has begun marketing its most “radical design” ever – the 20m-30m (66ft-99ft) BeachClub yachts that feature engines placed under the swim platform gaining a 2nd guest cabin inside.

“We are doing away with the traditional engine room,” marketing manager Youri Bijker told IBI. “Instead, below the swim platform sits a Volvo Penta IPS system driving two pod propellers that are individually steerable.”

The net result is unusual. Inside the yacht, a 16m (52.5ft) corridor stretches from the master cabin at the bow all the way aft to the swim platform. The corridor grants access to three cabins – two for guests, one for the captain.

“In 2019, we are very focused on the BeachClub,” says Bijker. “We’ll take it to the Cannes show where we expect it to generate significant interest.” The BeachClub’s naval architecture is by Ginton Naval Architects and the design, inside and out, by Cor D. Rover, both of the Netherlands.

The BeachClub has a cruising speed of 19.2 knots. Bijker says the no-engine room formula creates “an unrivalled amount of exterior and interior space. We have space for an extra guest cabin.” The first BeachClub, a 20m (61ft) version, has been launched, and the yard is building two more, one on spec.

“We have designs for BeachClubs of up to 30m,” Bijker told IBI in The Hague, after taking a prospective client on a North Sea outing. “The Volvo IPS 1350 can still deliver enough power for a 30m BeachClub.”