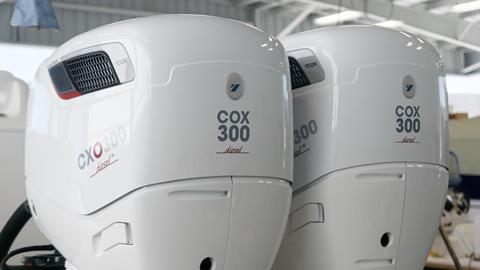 The first pre-production model of the lightweight CXO300, on display as a twin installation on Intrepid’s new 345 Nomad Centre Console, at the Ft Lauderdale boat show, offered visitors a tantalising glimpse of what Cox claims is the highest power density diesel engine ever developed. It marks the culmination of a decade’s work bringing the high-powered diesel engine concept from drawing board to reality.

Cox Powertrain’s Global Sales director, Joel Reid said: “Fort Lauderdale is the obvious choice for this significant launch. The area is a magnet for recreational boat owners and sports fishermen, and the number of twin, triple and quad outboard powered boats sold in Florida every month is staggering. Demand from this region has already exceeded our expectations. 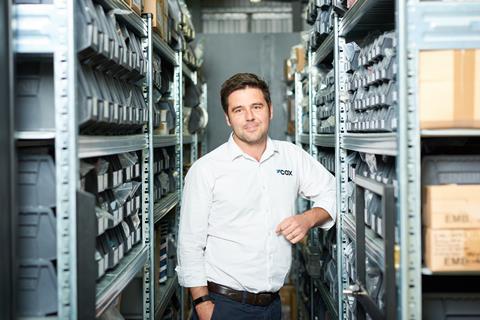 “We have worked tirelessly to establish an exclusive team of distributors, covering sixty countries across the globe,” continued Reid. “A strong and lasting relationship with boatbuilders is also crucial to our success and we are delighted to name Metal Shark and Intrepid Powerboats as the first boat builders to formally partner with us in the commercial and recreational marine sectors respectively.”

“The area is a magnet for recreational boat owners and sports fishermen, and the number of twin, triple and quad outboard powered boats sold in Florida every month is staggering. Demand from this region has already exceeded our expectations”

Ken Clinton, president of Intrepid Powerboats, said: “We have been looking for a diesel outboard for quite some time now and can’t wait to get some time on these engines. With many of our boats being tenders to the mega yacht market, we continue to get requests for diesel applications because they do not want to carry gasoline. With the fuel efficiency, low maintenance and dependability that diesel technology brings, I am very excited about the future of the CXO300.”

The original idea for a high-powered diesel engine had its roots in F1 and was developed by the firm’s founder, motor sports engineer David Cox. However, according to Cox, it was when this idea was taken to the marine sector that it really took off and development commenced for the world’s most powerful diesel outboard. The firm has established assembly facilities in Shoreham, England, and plans to announce a new US facility based in Florida soon.

So what’s so special about the 4-stroke V8 architecture of the CXO300?

“The unique nature of the high-powered diesel outboard has been possible through the combination of innovative design from air intake through to propeller shaft and the application of state-of-the-art diesel engine design to achieve a product meeting stringent EPA emissions legislation,” explained Stephen Moore, Cox Powertrain’s Technical Director. “In addition to the usual development challenges associated with a clean sheet design, we have also had to develop a supply chain, define build and test procedures and develop critical engine systems to suit the vertical installation. We predict users could save around US$190,500 over the lifespan of the engine through reduced fuel costs and believe the engine itself should last approximately three times as long as its gasoline counterparts.”

“We predict users could save around US $190,500 over the lifespan of the engine through reduced fuel costs”

Early in the development of the CXO300, Cox entered into a collaboration with Ricardo, an engineering and design consultancy, with specialist knowledge of environmental legislation. Ricardo apparently recognised the potential of the Cox opposed piston engine and formed a working partnership that Cox says has been fundamental to the firm’s development.

“Ricardo is pleased to have been able to support Cox throughout the development of the impressive CXO300 engine,” commented Ian Penny, Director, Ricardo UK. “The lightweight construction of this engine provides a compelling solution for performance outboard applications such as fast RIBs, requiring high fuel efficiency and durability.”

Stephen Moore, added: “Ricardo provided invaluable assistance both in helping to develop the CXO300 from a concept to a commercial reality and also in assisting the business’ transition from a start-up to an international player.”