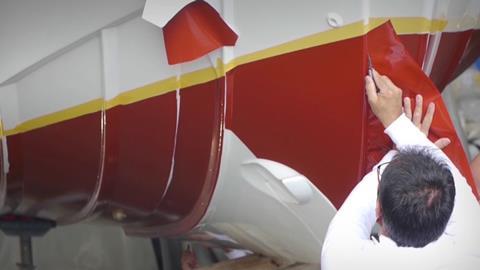 A Belgium-based company is hoping to capture a chunk of the antifouling market with a completely new approach that relies not on leeching poisons, but on making boats too slippery for marine growths to adhere to

For decades, recreational boats and commercial ships alike have used a variety of antifouling paint products to prevent marine growths from adhering to vessel hulls. Paints formulated with cuprous oxide and other similar copper compounds come in two basic forms: ablative paint, which is designed to wear off and constantly expose fresh layers of biocide, leaching copper into the environment in the process, and non-ablative paint, which doesn’t physically erode but also leaches copper into the water in order to work. How much so? Estimates suggest a 30ft sailboat will leach about two pounds of copper into the water each year, and that can lead to trouble when boats are found in concentrated environments like marinas, where copper levels can quickly build up to the point where they exceed toxicity standards.

A Belgium-based company is hoping to capture a chunk of the antifouling market with a completely new approach that relies not on leeching poisons, but on making boats too slippery for marine growths to adhere to.

MacTac – once popular as a self-adhesive shelf liner that was used in nearly every 1970s kitchen cupboard – has developed a new, patent-pending antifouling barrier product called MacGlide that could have a real future in the marine antifouling segment. Applied in sheets, MacGlide differs from traditional antifouling products in that it does not erode in the water and contains no biocides, making the product not only friendlier to the environment, but to boat yard employees who come into direct contact with it.

The MacGlide product consists of a self-adhesive film which is attached to the hull in transverse strips below the waterline, then coated with a special sealing varnish that the company has developed in cooperation with paint manufacturer PPG. In cross-section, the product is a lamination consisting of an adhesive polypropylene film, bonding primer, the anti-adherent silicone coating and a tough, transparent outer protective film. Sold in rolls, MacGlide forms a hard barrier that effectively prevents marine growths from attaching to the hull. Any growths that do manage to get a grip are swept off once the hull achieves a speed of seven to eight knots. “Thanks to its non-stick properties, MacGlide antifouling protects the hull from the colonisation of marine micro-organisms without spreading toxic substances into the ocean,” says MacTac business development manager, Daniele Perotti. “It is 100% biocide-free. Each year in Europe nearly 150,000 tonnes of antifouling paint containing biocides are used. One square metre of antifouling paint contains in average 15 grams of biocide, and each gram of biocide pollutes 10,000 cubic metres of water. Now consider that a 30ft yacht has an immersed surface of plus or minus 25 square metres and it’s easy to appreciate the impact on marine life.”

Perotti notes that MacGlide compares favourably against traditional bottom paints not only in its ability to deter growth, but also in terms of cost. “It will last for about five years,” he says. “Its durability is much greater than that of traditional toxic paints

As an added bonus, the product reduces friction, allowing boats to pass through the water more easily as a result of lower drag. This allows a higher top speed, while simultaneously reducing annual fuel costs by anywhere from 5%-6%. In development for five years, MacGlide comes in a choice of red or black finishes.

The company offers a companion product called TuningFilm for use above the water line as an alternative to decorative marine paints. TuningFilm comes in a choice of nearly 70 colours – including high gloss, matt, chrome and textured finishes – allowing boat owners to easily change their lower hull colour when they apply the product.