WhisperPower has launched “twin-power technology” to double the nominal and peak power capacity of generators by connecting two with the same power rating in parallel. 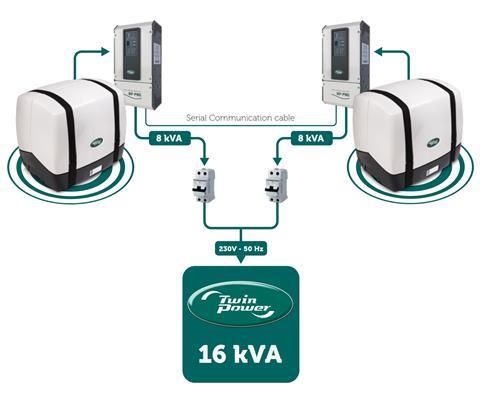 CTO Martijn Favot explains that traditional fixed speed generators are often over-sized as they must accommodate the maximum power of all combined AC equipment. “By connecting two Genverters in parallel … none, one or two Genverters are switched on,” he says. Favot says combining WhiperPower’s Genverter technology with its twin-power technology leads to more efficiency, reduced fuel use, less wear, noise and vibration, lower maintenance costs and longer engine life.

Also, running 2 smaller generators in parallel means that “in the event of a malfunction in one unit, there is always a back-up,” says Favot.

Genverters with a power capacity of 8, 10 and 15 kVA meet Stage V emission requirements, the strictest of its kind. By connecting 2 units in parallel, it is possible to assemble a system of up to 30 kVA that still meets the emission requirements. There are currently no Stage V systems of such capacity available in Europe.