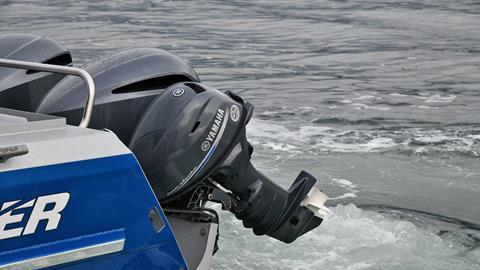 Boat builders, dealers and marine media gathered in Vancouver last week for the global debut of an all-new Yamaha four-stroke outboard engine and the formal introduction of its 425 horsepower V8 and Helm Master digital control system to the Canadian market. The event served as a launchpad for Yamaha as it targets the lucrative Pacific northwest offshore fishing market with what it sees as a fully integrated power system for offshore anglers.

The highlight of the event was the global unveiling of Yamaha’s all-new T-25C, a purpose-built, 25-horsepower four-stroke kicker outboard designed from the skeg up as a trolling motor for use on the heavy-duty welded aluminum boats that dominate the Pacific offshore market. Yamaha says the clean sheet design fills a void in the market by providing the additional power and capabilities required by offshore fishermen operating increasingly larger and heavier boats. “Every fisherman on the west coast has a kicker engine,” said Yamaha Canada product manager, J.F. Rioux. “For many years the 9.9 has been the go-to motor for that application, but with the larger and heavier boats that are now dominating the market there is a need for more power, and the T-25C delivers.”

The new two-cylinder engine was designed with an equal emphasis on high torque and light weight. Scaling 145 pounds, the new engine is a full 28 percent lighter than the Yamaha’s existing, 201-pound T-25A outboard. It will be offered in 20-inch and 25-inch shaft lengths to fit a variety of offshore fishing boat models.

In concert with the global unveiling of the T-25C, Yamaha took the opportunity to formally introduce its 425 horsepower V8 XTO Offshore outboard and Helm Master digital control system to the Canadian market, positioning all three offerings as a fully integrated solution not only for powering today’s offshore fishing boats, but as an attractive repower option that brings new capabilities to older boat