In late October 1968 the very first issue of International Boat Industry (IBI) was received by professionals in the marine leisure industry in over 110 countries. IBI was the brainchild of John Threlfall, who was one of the founding fathers of the International Council of Marine Industry Associations (ICOMIA) and former owner of South Western Marine, one of Europe’s largest marine equipment and engine distribution companies. Threlfall was a far-sighted businessman with a broad international perspective who also helped launch the first European Marine Trade Exhibition in Hamburg (EMTEC) in 1970, which was the forerunner of what has become METSTRADE in Amsterdam.

Employed to assist in the production of the first issue was a young journalist, Nick Hopkinson, who is IBI’s current publishing director and also celebrating 50 years unbroken association with the magazine and the recreational marine industry.

See a copy of our special feature on the history of IBI published in the latest issue, including a timeline of some the most significant events to affect its development, here. 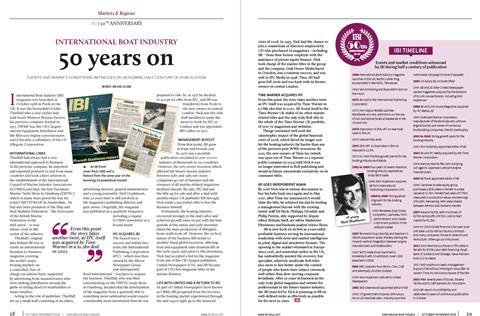